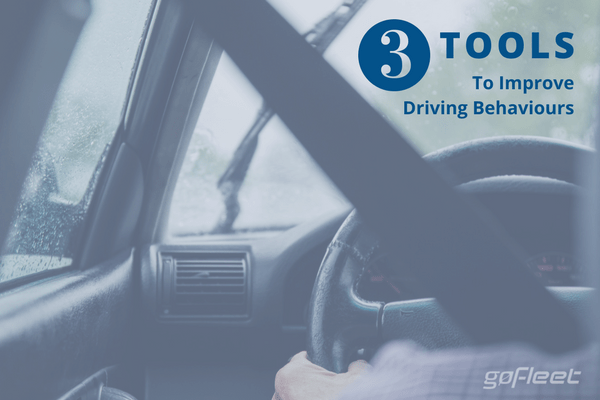 For many fleets, a top priority is improving driving behaviours. Let’s explore why this is important and what tools can help achieve this objective.

Why is improving driving behaviours important?

Drivers are a direct representative of a business’s brand. They often drive around with their company logo. Irresponsible driving could harm the business’s public image.

Bad driving is a business cost.

Worst of all, if drivers are involved in a major accident, investigators and the general public will ask questions. Who is at fault? Was the driver impaired? How has the company tried preventing the accident? Fleets must have solid answers to avoid legal penalties.

Businesses often use some of the following tools to improve their safety program.

A good step to improving driving behaviours is to establish and measure safety rules. Establishing safety rules is often one of the first things that a manager does. After establishing rules, the process is a bit more muddy. Some fleets are struggle to figure out how to effectively enforce their safety policies.

Many fleets are turning to driver reports to help measure safety. Driver reports measure how drivers performed according to the company safety policy. Safety managers can identify which drivers need more training and which drivers should be rewarded.

Speaking of rewards, an effective way to manage driving behaviours is to reward safe drivers. Gamification apps allow drivers to earn points and medals for good performance. Companies sometimes reward cash or bonuses to encourage drivers to climb the leaderboards.

The previous tool, driver reports, is a reactive measure. A more proactive tool is to use in-cab training. In-cab training involves giving drivers instructions in real-time. How does this work?

One example of such a tool is Mobileye. Mobileye is a sensor that warns drivers of impending collisions with other vehicles or pedestrians. If drivers are about to get in a collision, there will be a loud bell. This gives drivers time to stop before they get in an accident.

Another example is audible driver coaching with Geotab. Managers can create custom alerts for habits such as speeding, braking, cornering, and seatbelts. If a driver violates these rules, they would be warned by the Geotab system.

Another trend in safety management is to use camera systems. Cameras are a useful tool for providing concrete evidence to respond to complaints against drivers. In some cases, it exonerates drivers from false claims and avoid costly fines.

In addition to forward facing dash cams, some businesses use 2-way cameras. These cameras point both forward and towards drivers. Driver facing cameras are a deterrent for distracted driving. Drivers are less likely to drive distracted if they know they are being monitored. In case they are distracted and get in a crash, video footage would pin liability on the driver.

A recent advancement in driver video footage is called “Nauto”. Nauto is a driver facing camera that senses when the driver is distracted. This gives fleet managers valuable training reports and footage to immediate stop distracted driving.

Loading...
← Prev: Heavy Equipment Tracking Must Have Applications Next: Responding to Hurricanes with Utility Asset Management →
Contact Us