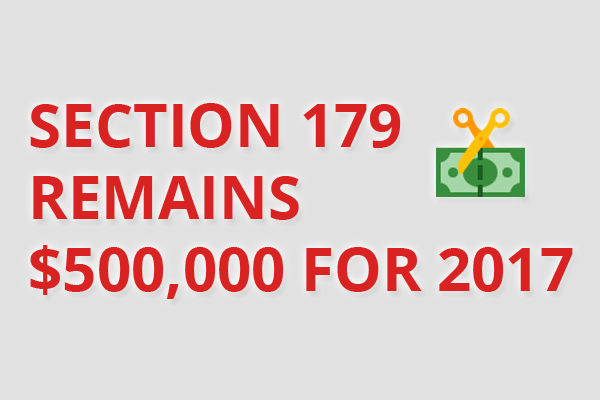 President Obama extended the deduction and added a bonus depreciation in his 2009 Stimulus Bill. A subsequent bill in 2010 raised the expensing allowance to $500,000. It was extended again in 2012 and 2014, and by that time businesses had become so used to the “temporary” increases in expensing allowance that it was difficult to let the deduction expire. So, at the end of 2015, Congress made the increased Section 179 expensing limit permanent. Congress touted the “certainty” in making the tax break permanent and representatives of the business community called it “easily the most positive thing Congress has done for small business in the past several years.” There is mixed evidence about the effectiveness of the tax break in stimulating the economy, but there is no doubt it can be beneficial to individual small businesses.

The current law gives companies in all lines of business the option to expense the cost of new and used qualified equipment in the tax year when that equipment is put into service. The maximum deduction allowed is $500,000. The deduction is subject to two limitations. First, if deduction is phased out based on overall investment by the company, so that if a company invests more than $2 million in equipment in a year it will not be able to take the Section 179 deduction. Second, a company may not deduct more than its taxable income. Additionally, the ability to carry the deduction forward into subsequent years is very limited.

At GoFleet, we encourage all our US customers to consider the Section 179 Deduction. Our small business customers should all be able to deduct the full amount of all our hardware products. You should confirm your eligibility with your own tax advisor, but the experienced professionals at GoFleet are always happy to discuss our tools and the financial arrangements that best benefit your company.