Based in: Goodlettsville, TN

The Goodlettsville Police Department handles all law enforcement for the township of Goodlettsville, Tennessee.  Their mission is to serve all people with respect, fairness and compassion. They are committed to the protection of life and property; the vigorous enforcement of local, state and federal laws; and the defense of the City of Goodlettsville Charter. The police force is also committed to serving the community in order to enhance the quality of life and to nurture public trust by holding themselves to the highest of standards of performance and ethics.

The police department vehicles in the small town of Goodlettsville typically took a beating.  This lead the maintenance and accident rate of their fleet to rise significantly over time. This was not only costly, it wasted a lot of valuable time and reduced safety. The accident and maintenance for one vehicle was typically costing them around $1000 per accident (being paid by the taxpayers of the city).  Also, the increase in accidents caused the department’s insurance rates to skyrocket over time – an expense that could be avoided. It soon became apparent to the department that they needed a solution that would:

After taking some time to evaluate multiple fleet management options, it quickly became apparent that GoFleet provided the best option to meet their needs.

Utilizing GoFleet’s system as their fleet management solution lead to quick improvements within their fleet and helped them achieve the goals that they had set.  The system provided a platform for the department to monitor both driver behaviour and upcoming maintenance orders, which allowed the police force to take a proactive approach in managing vehicle maintenance.  The fleet manager of the department conducts monthly audits on 4 random drivers within their fleet to ensure that their officers are driving safely and not putting unnecessary wear-and-tear on the vehicles.  This has lead to a steady decrease in maintenance orders/engine fault exceptions from 252 to 71, and a reduction in maintenance costs from $25,200 to $7,100 per month with each maintenance job costing an average of $100 (savings of $18,100 per month). 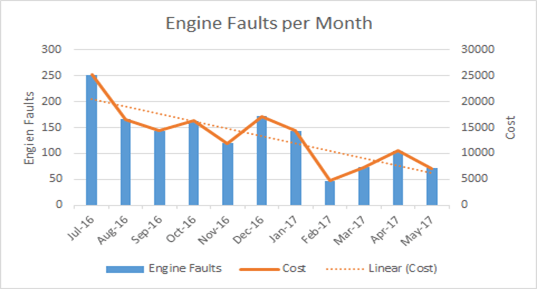 Since the system was implemented into the fleet’s operations, potential accidents have become almost non-existent. Monitoring their driver’s behaviour has made an impact in reducing the number of potential accidents tracked on the system. The possible accidents report shows that there have only been 3 potential accidents in the past 11 months. This has played a huge role in both improving the safety of the officers on-duty and also reducing the cost to repair their vehicles. The reduced accident rate has also led to a reduced insurance rate; insurance costs declined by approximately $20,000 per year simply because their accident rate was much lower and they had GPS vehicle tracking devices in the vehicles.

The system was also very user-friendly and easy-to-use for the police department. The fleet managers were able to easily monitor driver behaviour, keep track of maintenance orders, pull specific vehicle data they were looking for, and much more. The different reports in the system made it simple to pull specific data that they wanted to view from their database, while the multiple tabs in the system made it easy for the fleet managers to access the data provided. The support staff is always able to answer any questions promptly thanks to the information provided by the system.

“In 2014 the Goodlettsville Police Department began looking into AVL/GPS for its patrol cars and one of the companies was GoFleet. After a few months of reviewing, GoFleet was chosen because of the ease of installation, the amount of data that could be received, and the valuable customer support.

In 2015 officers were involved in a total of 10 at fault crashes which resulted in a large increase in the city insurances. The AVL/GPS units from GoFleet began being installed on the patrol cars the last half of 2015. Along with some policy changes, the department began to see an improvement in the driving habits of the officers.

In 2016 there was a total of 2 at fault crashes, which occurred in parking lots while backing up (resulting in little to no damage). As a result, insurance rates began to decline and patrol cars were not as frequently in the body shop.

GoFleet’s support staff has always been available when needed. The data is easy to understand and the company has been willing to work with our department to make the data more police friendly.”